On January 4, 2019 the Wall Street Journal published a powerful article written by Joseph Walker and Christopher Weaver describing how Medicare Part D insurers kept $9.1 billion more in taxpayer funds than they would have had their estimates been accurate from 2006 to 2015. 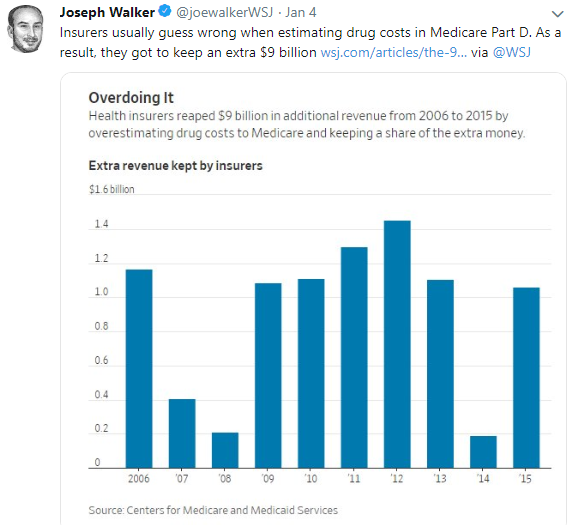 In the WSJ  article, the writers do a deep dive into the complexity of Centers for Medicare and Medicaid Services, CMS, Medicare Part D funding to private insurers.

Here are some of my takeaways from the article:

WSJ reports 46% of all Part D members in the analysis were in plans that resulted in windfalls to the private insurers and only 1% in plans that were not.

The article’s closing paragraph sums it up:

“The Obama and Trump administrations have both proposed slashing the reinsurance subsidy and increasing plans’ risk for patients with very high drug costs. The change can be made only by an act of Congress, and legislators aren’t actively considering it.”